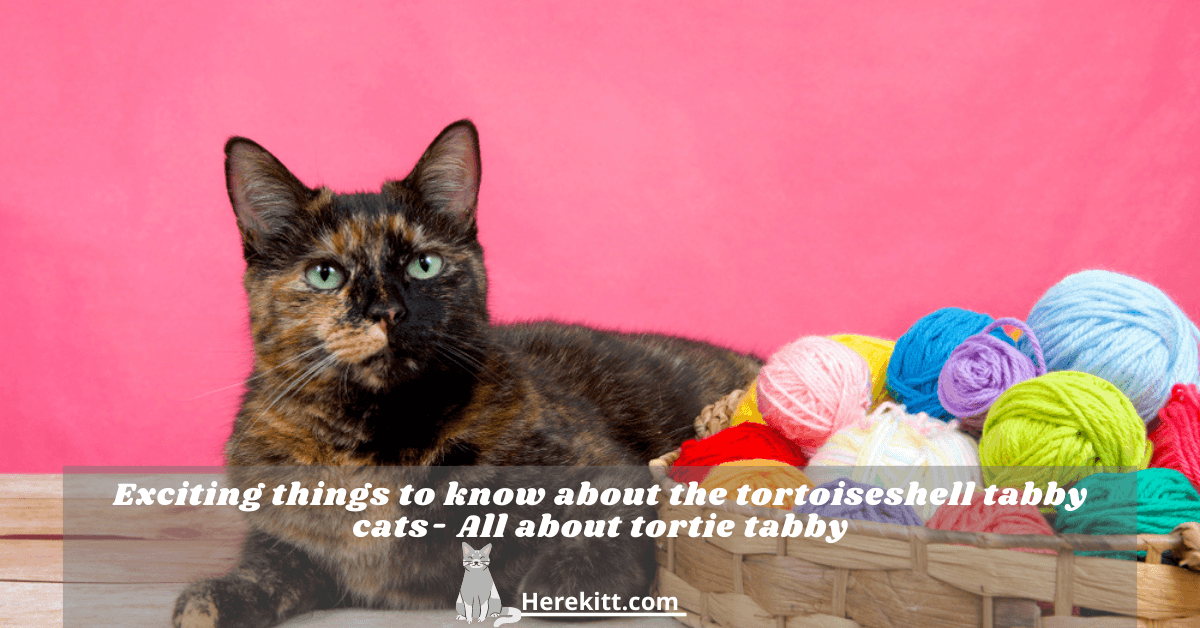 Exciting things to know about the tortoiseshell tabby cats

A tortoiseshell tabby cat displays the widest variety of color and pattern combinations in its fur and can even incorporate many other distinctive coat color patterns in it. Being one of the most commonly seen patterns in cats worldwide, the tortie tabby cat color pattern can also be a little confusing to understand. We are going to give some relevant details regarding the torbie cats to make it easier for you.

About the tortoiseshell pattern in cats

The first thing to understand is that the cats having the tortoiseshell fur pattern are not a distinctive breed. It is just another unique fur pattern and coloration that can occur in a wide variety of cat breeds like American Shorthair, Cornish Rex, Maine Coons, and many others. The fur of these cats displays multi-color combinations including the four primary colors of black, red, orange, and brown.

These coats can be darker in shade as well as dilute or lighter. Chimera and Mosaic are the two prime varieties of the tortoiseshell cat where the former displays a mixed shaded coloration on the entire body while the latter has a half and half color display. Another categorization of this coat pattern involves the patched or bridled categories.

Tortoiseshell variant of the tabby cats

Tabby cats are known for their unique yet most common fur pattern which exhibits multiple color combinations and unique facial markings.  These facial features are shared by every tabby cat that involves darker shade lines reaching the lower part of the ears from outer eye corners and an M mark on the forehead in a darker shade too. These cats can have many combos and fur patterns.

Here are the three patterns of the tortoiseshell tabby cats-

Mackerel pattern: This is the most commonly seen cat pattern that includes parallel lines of a dark shade running downwards on the body.

Classic pattern: This is a very creatively settled pattern with dark shade lines swirling on body sides and making butterfly patterns on the shoulders.

Ticked pattern: This is the most vibrant pattern seen on the torbies where multiple colors adorn every single hair shaft. The overall look of these cats is the most densely colored one.

Tortoiseshell variant in the calico cats

Calicos cats are known for their multi-color coats that can exhibit infinite color and pattern combinations. This gives way to the possibility of them belonging to a white variety of breeds and also assures the fact that can have many distinctive patterns too.

The tortoiseshell cats also exist as a variant of the calico cat breed where their fur pattern displays a combination of many colors from a huge range of options. A lot of charming color options like those of black, blue, cream, red, ginger, lilac, chocolate, etc. can be seen on the calico tabby mix cats.

The white fur patches exist in a very scanty amount on the coat of these cats. These patches appear in the form of tiny spots usually around selective body parts like the chest, paws, and face. You may even consider these cats as another variety of the spotted tabby cats.

The only major difference between the calico cats and tortoiseshell cats is the base fur color. The coat of torties is that of black color mostly while the calicoes have a white fur base.

These cats are also known by the name of calibby and are another close relative of the tortoiseshell cats. The Calico tabby mix cats are also considered a variant of the calico cat breed where they are seen as displaying the unique tabby stripes that look like the tiger stripes. Sometimes, these cats also exhibit the small patches of black and ginger color on their fur which is an exclusive phenomenon seen in the calico cat specie.

You can also find the calico style color patches of black and orange mixed with the spotted markings or tabby stripes being displayed on the fur of these cats. These cats have the patched tabby fur along with white fur patches mixed onto it.

Since the tabbies can be a tortie too, it’s very much possible that the tabby patterns may come to co-exist on the calico fur pattern which would then be called the torbie and white. It’s all the matter of genetic intermingling that can generate extreme variation possibilities in cat coat colors.

The common link between calicoes, torties, and tabbies

The different varieties of cats that we discussed above are all overlapping cat coat color combinations of the three main types called calicoes, torties, and tabbies. Now, if you closely observe, there is a common link connecting all of them. This is the number and arrangement of colors present in these cats which makes a distinctive category called the Tricolor cats.

Again, the tricolor cats are not any specific breed; they are just a unique color pattern that can occur across different breeds of cats. A tricolor coat exhibits the combination of any two colors with the white color being the constant third color. Here is how this pattern exists in the types of cat coats discussed:

Some facts about the tortoiseshell tabby cats

We have already seen how diverse the torbie cats can be and it can be amazing to know more about them. On that note, let’s see some facts about the torbies:

So, here was all about the tortoiseshell tabby cats which are surely capable of attracting sights due to their unique color patterns. It may at a point get overwhelming to understand the minute differences but the ultimate realization of all these cats being so beautiful makes it less cumbersome.

Learn Everything You Need To Know About A Hyper Cat

Are Foxes Cats Or Dogs – Know The Answer Here

Why Do Siamese Cats Have Blue Eyes?

My name is Luna and I am a great cat lover and a cat owner of three lovely cats. I have owned many cats till now and have dedicated many years to nurturing and caring cats. Through this blog, I am here to share my knowledge and experience about cats.

←Previous post Next post→
Popular Posts
Recent Posts
When Do Kittens Start Pooping? The Complete Guide To Your Kitten’s First Poop Cycle 19 comments
Why Is My Cat Suddenly Pooping Outside The Litter Box? Keep Your Feline Healthy! 17 comments
Is Your Cat Disturbing Your Sleep? How To Keep Cat Off Bed 5 comments
Can Cats Eat Shrimp? Is Shrimp Consumption Safe For Your Feline? 4 comments
Why Does My Cat Smell Like Poop? Is It Making You Feel Helpless And Distraught? 4 comments
Why Does Cat Poop Smell So Bad? The Apt Ways To Deal With Bad Odor From Your Cat 4 comments
How Much Do Siamese Cats Cost? Siamese Cat For Sale 3 comments
Why Does My Cat Pee On My Clothes? Is This A Way Of Showing Her Affection? 3 comments
Why Do Cats Lay On Paper? An Intriguing Habit Of Cats 2 comments
Why Did My Cat Pee On My Bed? It’s Time To Get Serious About This! 2 comments
Tips for Leaving The Cat Home While Away June 29, 2021
How To Paint A Cat Portrait: 10 Easy Steps For Everyone June 16, 2021
Things Only Cat Lovers Will Understand May 14, 2021
Do You Need to Give Cats Supplements? May 6, 2021
Carpet Fleas Elimination: Top Methods to Keep Your Pet Safe April 16, 2021
Do Goldendoodles Bark? What Do You Need To Know? April 10, 2021
Finding The Perfect Toys For Blind Cats To Keep Them Joyous And Active January 16, 2021
Learn Everything You Need To Know About A Hyper Cat January 8, 2021
Get A Slow Feed Cat Bowl For Your Kitty To Help Her Stay Healthy And Fit! January 8, 2021
Why Does My Cat Knead Me- Understand Cat Psychology Behind Kneading Humans! January 6, 2021